Although the phases of physical development vary from child-to-child, there are clearly defined stages of development that occur at roughly the same age. This means that parents can anticipate the changes that will occur throughout baby’s life, right from the time that he is born. Knowing what to expect also makes it easier to determine whether the physical developments appear normal.

However, emotional development is a totally different ball game. How will you, as a parent, know if your child is on par with the natural emotional development of other children? Especially with regards to a baby who, for the first few years of his life, cannot even communicate in a clear manner.

What some new and expecting parents might not realise is that, like the physical developments, the emotional developments of children also follow clearly defined stages as well. Many parents may worry that there is something wrong with their child when they behave a certain way. In most cases, nothing could be further from the truth. However, it helps to have a clearer understanding of what the emotional stages of development are in a baby and young child.

(It is important to note that, while the stages described correspond generally to a child’s chronological age, your child’s development may vary to an extent.)

According to information released by the Child Welfare Information Gateway, the primary task of a baby is to develop a sense of trust in the world and come to view it as a place that is predictable and reliable. Infants accomplish this through attachment to their caretakers. During their early months, children have an inborn capacity to “bond”, which ensures their survival. They express it through sucking, feeding, smiling, and cooing, behaviours which, ideally, stimulate loving responses from their parents.

These interactions and the parents’ consistent attention make-up the parent-child bond and build the foundation for a child’s sense of trust.

During this period, children require a consistently nurturing and tension-free environment to make them feel secure. The most valuable thing a parent can do is to show their child that he is loved and that he can depend on you. This can be achieved through constant attention and affection. If you generally respond to your child’s cries, he will learn trust. If you hug and smile with your child, he will learn to feel content.

Although the need to attach continues for a long time, the process of separation also begins in the first year of a child’s life. A milestone is reached when children learn to separate from their parents by crawling and then by walking. At the same time, babies often become fearful of separation. Psychological separation begins too. Babies start to express their own wishes and opinions in a non-verbal manner. Many experts in child development view early childhood as a series of alternating attachment and separation phases that establish the child as an independent person who can relate happily to family members and friends. This also marks your child’s capacity to have intimate relationships with others.

According to additional information released by the Child Welfare Information Gateway, toddlers continue the attachment and separation cycle in more sophisticated ways in the second year. They learn to express how they feel by reaching their arms out and also protesting vigorously when they need to be left alone.

Anxiety related to separating from parents heightens at this point and they may begin to express anger. During this stage, your role is to primarily guide and protect your child, as you will find yourself constantly saying “no.

Your child will react with frustration and will show this emotion in various ways. Helpless crying usually comes first. Your child may later exhibit aggressive behaviour such as throwing things, hitting, pushing, biting, and pinching. Much of this behaviour is directed towards you but at other times it can be directed at your child’s peers.

Such behaviour often puzzles and frightens parents. You may wonder if your child is normal, however, experts agree that this kind of behaviour is typical of toddlers who have conflicting wishes about their push toward autonomy and their anxiety about separating from you. Almost all children go through a “me do it myself” phase, accompanied by temper tantrums and toilet training battles. Handling tantrums, setting limits, and encouraging language development and the expression of feelings consume most of your time and patience.

The preschool years are filled with activity and nonstop questions. Once children learn to speak, they need only a partner and the world becomes theirs for the asking and telling. This is also a time when children’s ears are wide open to adult conversation and they take in so much more than adults would like.

Parents usually answer as best as they can or see fit, however according to Child Welfare Information Gateway, the more comfortable parents are with answering questions honestly, the more encouraged their children will be to learn. A lack of interest in learning often results from having questions met with too many “I don’t knows” or the obvious indifference of parents to their children’s curiosity.

Sometimes parents feel so embarrassed about not knowing all the answers to their child’s questions or are so afraid of giving the “wrong” answer that they ignore a question or change the subject. In doing so, they often miss a chance to discuss critical issues with their children.

Children between the ages of two and five have fears, especially about being abandoned, getting lost, or no longer being loved by their parents. They also engage in “magical” thinking and do not reliably distinguish between reality and fantasy. They may be afraid of giants, monsters, witches, or wild animals.

Children in this age group become increasingly familiar with separation from loved ones, often because they are now enrolled in a daycare or preschool programme. They also make new friends outside their family, and their interests broaden. At the same time, they notice that their parents do not know everything and cannot control everything that happens to them. This can be frightening because it threatens their sense of security.

As you observe your children and others, you will notice that both boys and girls imitate their parents’ nurturing and care-taking activities. They carry, feed, change, and put to bed their dolls and stuffed animals. They kiss them and sometimes throw them or hit them.

They are mimicking attachment and separation behaviours. If a baby enters the family, many two, three, and four-year-olds insist that it is their baby, that they “borned” it or “adopted” it. Sometimes a girl will tell you that it is her baby and that daddy is the father. A little boy might say that he is going to “marry mommy when daddy grows up and dies.” If you listen, you will see that your child is trying to make sense of the relationships in the family and to find a way to express the strong emotions of love, hate, and jealousy.

The Oedipal and Electra Complex

Understanding why mom and dad sleep in the same bed while they have to sleep with two trucks and a bunny is puzzling for children. This is known as the Electra complex in girls and the Oedipal complex in boys. Little girls may feel jealous of their mothers’ grownup relationship with their fathers. They experience a mix of feelings which includes wanting to marry daddy, but feeling competitive and fearful that they will not “measure up.” Little boys may want to be mommy’s partner in everything and show-off their developing “manliness.” They do not understand why daddy should be included but worry that Daddy will be upset with them for the way they feel. All of this behaviour is normal amongst children this age.

There is also an aggressive, competitive side to this stage. You may notice behaviour that is challenging, stubborn, and argumentative, usually directed toward the same-sex parent. Girls argue with their mothers about what to wear, what toys to leave at home, and who is the boss of the baby. Boys want to talk about what they will do when they grow up, and even in the most peaceful of families, they will turn all sorts of items into weapons which they yearn to use on the draperies, the baby, and, in frequent moments of frustration and anger, on daddy.

These behaviours are part of children’s awareness of their smallness and their rival urges towards autonomy and independence. They want to be big but also want the benefits of infancy. If they cannot be mommy or daddy’s partner, they want to be their “lap babies.”

Gradually, the intensity of these feelings abates. Children’s love for their parents allows them to reconcile the Oedipal or Electra complex by eventually exchanging the wish to marry the parent of the opposite sex for the more realistic desire to grow up to be like the parent of the same sex.

These first few years are the amazing and wonderful years. It is normal for parents to worry about their child and to be concerned that they might not be following the -normal’ stages of progression. However try not get too wrapped up on these concerns and instead enjoy these first few years together. Before you know it, your little one will be off to school and a whole new chapter of life will begin.

If you feel that your child may be acting a little too differently, it is always a good idea to seek out professional advice. 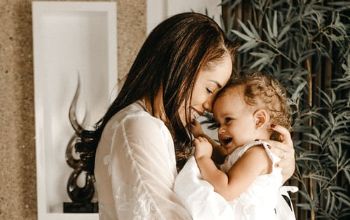 How To Start Your Baby On Solid Foods