Introversion And Shyness In Children 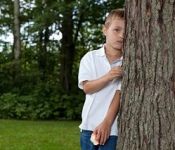 Shyness is often misunderstood because it’s not one, single emotion, but many emotions together at the same time. The two main emotions that exist in children that are shy are fear and embarrassment. Children who are shy also tend to lack self-confidence and are extremely self-conscious: they try to avoid being in the spotlight because they are scared of what someone might say to them or think of them. Children who are extremely shy can miss out on a lot of great experiences and events in their lives.

How do you know if your child is overly shy?

Symptoms of being shy are:

There are several causes to shyness in children – some are known and can be overcome, some not. Some causes of shyness are:

The negative effects of being shy

Shyness can affect children in several ways and is sometimes even carried through to their adult lives. Some of the negative effects of being shy are:

Preventing is better than curing

There are several techniques parents can use to prevent their children from being shy, but one of the most important tips on preventing shyness is to identify shyness. Once signs of shyness appear in a child, it’s extremely important that parents address it immediately, before it becomes worse.

Kid-s Rooms – Can They Be Kept Tidy?

Child Safety at the Playground