Teasing – Putting An End To It 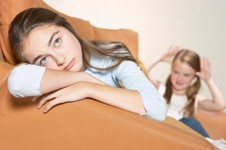 Myth or fact: Sticks and stones can break my bones but words can never harm me. Absolute myth!

But because there are no noticeably direct physical signs from teasing, society tends to brush this form of abuse under the carpet. Yet the emotional wounds of teasing can have far-reaching and hugely detrimental effects. We see this to a large extent in abusive marriages, but we choose not to face it with our children even though the parallels are identical.

Teasing, and even bullying, is very rife among our children especially at school-going age.

It’s time to pay attention, parents, because by not addressing this destructive behaviour you could actually be aiding your child into an adulthood of low self-esteem and even self-hate.

You need to be on the lookout for personality and behaviour changes in your child, just as you would be aware of such with your teenager for fear they may have fallen into the drug trap.

There is always a reason your child may show signs of moods swings, behaviour (passive or aggressive) changes and personality changes. Don’t shrug it off. Act now and say -NO to teasing and therefore abuse as well.

Child psychologist, Sheetal Reddy, said that child teasing was a serious issue. -It is vital for parents to pick up the signs of their child being teased early before character and personality damage occurs as this often leads to adult anxiety, depression and even suicide tendencies.

Good-natured children will often make fun of a peer, but it is when this -making fun’ begins to attack the other’s self-esteem that things need to be stopped. This is when it has gone too far, and too far is a dangerous place for your child to venture.

We shouldn’t lose sight of the fact, however, that healthy banter and occasional, light-hearted teasing is all well and good. This can help a reserved or shy child to learn to laugh at themselves and increase their confidence.

If your child is shy, help them along by setting an example, by laughing at yourself. This will teach them not to be too sensitive and it will help them to cope a little easier.

Assertiveness is something we all try to instil in our children and with gentle guidance you can teach them how to stand up for themselves without attaching aggression to it.

Explain to your child the importance of standing on their own because the teasing child is usually acting this way in an attempt to establish a sense of superiority over the other and they will only target those they see as weak and inferior to them.

If the teasing is happening at school, at football practice or even at a friend’s home, enlist the help of the teacher, coach or parent to keep an eye out for this and diffuse such situations subtly and diplomatically. The last thing your child will want is to be favoured by an adult while the teasing child is chastised in front of their peers. This will only fuel the situation.

Look out for mood swings and behaviour changes such as a decline in school work, not wanting to go to school, out with friends or to sports practice. Take note if they become withdrawn and spend more and more time alone, not even interacting at the same previous level with the family.

Not an idiot, not stupid

Another give away is if they begin putting themselves down and referring to themselves as -idiot’, -stupid’ and the like.

If you can catch these signs early and stop the abusive teasing you will be able to prevent your child from suffering deep-seated, long-term issues stemming from low self-esteem.

The Importance Of Reading To Your Child

Getting Ready For School