The Montessori Route To Education 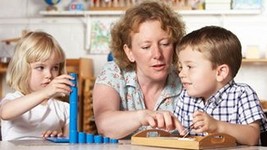 Education, we all agree, is imperative to our children’s futures, providing the world with the next generation of well-adjusted, well-educated young adults. As parents, some of us choose to send our children to government or state schools, private schools and some even prefer the home schooling option for our youngsters.

Briefly, Montessori education was the brainchild of Maria Montessori in the 19th century – a woman way beyond her time.

Focus on the child

The essence of this educational structure offers a child-focused approach to education where even the teacher is not traditionally the focus of each class because the class belongs to the children. He rather forms an intricate third link, so to speak, connecting child and education.

The Montessori schools provide education from birth to 24 years old, with separate groups spanning a number of age groups within. Harmony and respect are vital elements children learn at Montessori schools, but the one element probably most difficult to comprehend is the self-taught mechanism.

With the developmentally appropriate materials at their disposal, children also embrace the freedom aspect to follow their individual interests and in so doing, teach themselves.

It can be a difficult concept to grasp for those of us parents schooled in more traditional manners, but the proof is in the pudding – so to speak!

The aim of Montessori schooling is to nurture a child’s natural tendency to learn. Teachers in this field guide rather than instruct, linking each student with activities that meet their interests, needs, and level of development. The classroom is designed to allow movement and teamwork, coupled with an aspect to promote concentration and a sense of order.

Classrooms resemble anything but traditional ones with row upon row of desks facing a -teaching’ teacher. Instead they provide openness as sections such as group activity, individual areas and others complement the overall space.

Grouping ideal age groups together, education is stimulated and allowed to flow within four main clusters.

The first plane incorporates children from birth to six years, then from seven to 12 years, 13 to 18 years, and finally from 19 to 24 years.

After much studying and watching children in a normal school environment, Maria Montessori created these four planes and adapted them to accommodate different characteristics, learning modes and developmental imperatives.

Freedom to learn as opposed to forcing to learn appears to entice the most from children who are generally hungry to learn.

With a structure constructed in proportion to the child and his needs, children prosper. Elements such as beauty and harmony, order, a set up that encourages movement and activity, and the provision of materials that only support the child’s development are part of the classroom structure.

As each child grows and therefore enters the next age and development group, so subtle differences in teaching practices are included. However, all target each child’s inherent yearning to learn.

Those whose children are in the Montessori education plan have reported a unique combination of freedom and creativity with responsibility and self control.

Maria Montessori was nominated three times for the Nobel Peace Prize – once in 1949, then again in 1950 and finally in 1951. Her love for children, for knowledge, and for imparting knowledge to young minds has been evident in both her life and in her effortless quest to provide a learning structure such as this.

Age Restrictions On Movies, Are They Really Important?

Encouraging Your Child To Eat Healthily