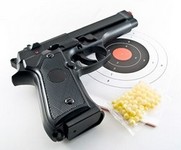 A toy gun may seem to be a very innocent, childish plaything but the fact is that a number of countries have put a ban on the sale of toy guns and are in the process of banning toys guns completely. As South Africa advocates a gun-free society, it may be time to think about what effect (if any) toy guns are having on our kids.

Little boys (and girls) have been playing with toy guns for generations. Cast your own mind back to fun, childhood games like cops and robbers, cowboys and Indians – these games would surely not have been half the fun, if toy guns were missing! Is society barking up the wrong tree or can toy guns have a negative impact on our children and allow them to view violence in a positive light? Are these seemingly innocent play weapons causing our kids to associate violence with fun?

The toy gun debate began in earnest when toy guns began to look very similar, if not identical to real-life guns. BB guns look almost indistinguishable to the real-life guns and because they can be purchased from just about anywhere (most flea-markets sell BB-guns and ammunition for less than R30) these guns are very cheap and easily accessible. The SAPS along with a number of other police departments around the world have reported crimes that have been committed using realistic looking toy guns. In New York, a pair of teenagers were shot dead when they attempted to rob a shop using only toy guns. Many states in the United States have placed an outright ban on the sale of realistic looking guns; toy guns which are manufactured in bright colors (red, orange, etc) are now sold and all guns made in realistic colours like black and silver are banned. Manufacturers and retailers, who disregard this ban, can face high fines and prison time.

Bearing this in mind – as South Africans we hear daily of awful crimes which are being committed around our country. The question is how many of these guns which have been used to commit the crimes, are real? What’s more, should we, as responsible parents, allow our kids to have access to realistic looking guns and are we really promoting violence when we permit our children to use toy guns at playtime?

Child experts, including many child psychologists seem to share the same views when it comes to permitting kids to play with toy guns. Their argument is that all toys that are given to children carry a message, and this message is that parents approve of the toy and approve of what the toys encourages or promotes. For instance, when parents give their girls a baby doll, their hope is to nurture their mothering skills, and when little boys (or girls) are given toy guns to play with, is the message that we’re conveying condoning the use of guns? Do we want to promote violence at play time?

Parents are divided when it comes to buying their sons toy guns. There are those who are actively and adamantly opposed to any type of weaponry toys whatsoever and refuse to allow any type of guns or weapons, including swords, to be played with. However, children tend to be rather industrious and kids who have been banned from toy guns have been known to construct makeshift guns out of Lego or even out of paper – while other kids are quite content to use their fingers to create a -bang bang – you dead’ gun during an intense game of cops and robbers.

Many organisations have been created and their sole objective is to ban the use and the sale of toy guns. Their approach is to actively discourage parents from purchasing and condoning toy guns. These campaigns have hard-hitting slogans like -Toy gun is no fun’ – World Vision Network. This organisation is campaigning for a worldwide ban on the sale and use of toy guns and their hope is that within a few years, parents will drastically change their views and realise the dangers of these -innocent’ playthings.  This campaign hopes to create awareness of the hazards and risk of toy guns and how toy weapons are promoting violence among kids. Their argument is that parents should rather choose to purchase educational toys and games instead of guns which teach little more than violence and which only promote mayhem.

Gun Free South Africa believes that when kids are encouraged to play with guns, children are desensitised to the dangers and risk that guns really pose, rather than seeing gun as being the dangerous weapons which they are. The realistic appearance of toy guns results in children not being able to tell the difference between the real gun and the fake or toy gun, and this means that the genuine weapon is simply seen as just another toy.

With any debate, there will always be those who are for and those who are against. No matter if you vehemently oppose toy guns or you see them as innocent toys, parents need to discuss the dangers of guns. Children who are permitted to use toy guns during play must be taught how to use them (especially the guns which look virtually identical to genuine guns). Parents, who themselves keep guns, should go to great lengths to educate their children on the dangers of guns and always follow safe gun-keeping practices, such as locking the gun in a safe, etc.

Parents who purchase toy guns must attempt to buy guns that bear no resemblance to the original weapons, such as the brightly-colored water pistols, etc.

There is no evidence whatsoever that kids who play with guns will turn into violent, gun-toting adults. Perhaps the biggest issue to come out of the toy gun debate is that toy guns are being used by criminals to commit crimes. Maybe campaigners who want to place a ban toys guns should focus their attention on the manufacturers who manufacture the realistic BB Guns, etc which are visually identical to their authentic counterparts, and allow boys to be boys.