What Is Ectopic Pregnancy? 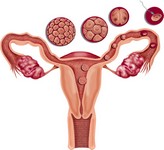 An ectopic pregnancy is a bizarre phenomenon which occurs when a fertilized egg is unable to move down the woman’s fallopian tube to enter into the uterus. The fallopian tubes may be blocked because of an infection, or a swelling of the tube causes a partial or complete blockage. Pelvic Inflammatory Disease (PID) is a common cause for the fallopian tube blockage.

Why do ectopic pregnancies occur?

To understand how an ectopic pregnancy occurs, we need to understand what happens during a woman’s menstrual cycle.

Each month a woman’s ovaries produces an ovum. The ovum is then drawn into one of the fine finger-like tubes, known as fimbriae. The ovum is propelled by the cilia towards the uterus. During its journey it may come into contact with a man’s sperm and if so, the ovum may become fertilized. The fertilized ovum implants itself into the special lining of the uterus which is renewed every month and this lining, called endometrium, begins to develop into a baby.

If the egg is not fertilized on its journey to the uterus, the ovum together with the lining are discharged monthly by the woman’s menstrual flow, and a fresh lining is prepared. With the monthly menstrual cycle complete and the lining renewed, a new ovum starts to ripen in the ovary (and the cycle continues).

Both cases are equally serious and require immediate medical attention.

Symptoms of an ectopic pregnancy

It is difficult to diagnosis an ectopic pregnancy simply because the symptoms experienced are virtually (if not totally) the same as that of a normal early pregnancy. The woman will miss her period, experience breast tenderness, nausea, vomiting, and frequent urination (all typical early pregnancy symptoms).

As the pregnancy progressives, the woman will experience several warning signs that things are not right, the first being pain or vaginal bleeding. Pain is often experienced in the pelvic area and abdomen, but in severe cases, shoulder and neck pains are not uncommon. This happens when blood from a ruptured ectopic pregnancy builds up and irritates certain nerves. The pain experienced by most women suffering from an ectopic pregnancy has been described as being intensely sharp and an almost stabbing type of pain.

Other symptoms that may suggest an ectopic pregnancy include:

Women who are at a greater risk for an Ectopic Pregnancy

Any woman (of any age) can suffer from an ectopic pregnancy, but the risk is increased for women who are over the age of 35 and who have had:

Furthermore, certain birth control methods can also increase a woman’s risk of an ectopic pregnancy. A woman who falls pregnant while using progesterone-only oral contraceptives, progesterone intrauterine devices (IUDs), or who has taken the morning-after pill (to avoid a pregnancy), is considered to be at a higher risk for an ectopic pregnancy. Additional factors known to significantly increase the chances of such a pregnancy occurring include smoking and having multiple sexual partners.

A woman who believes that she is at risk for an ectopic pregnancy due to her lifestyle choices can reduce or lower the risks by giving up smoking and using condoms during intercourse (unless pregnancy is the desire). Condoms offer effective protection against sexually transmitted infections (STDs) that result in Pelvic Inflammatory Disease (PID).

The possibility of future pregnancies after an Ectopic Pregnancy

However, it’s not all doom and gloom and many women have managed to conceive after an ectopic pregnancy. The fact is the earlier the ectopic pregnancy is terminated the better, and damage to the fallopian tube will be minimised. In this instance, the woman’s chances of carrying a baby to term are increased. Even if the pregnancy has meant the loss of one tube, women are still able to become pregnant with the aid of fertility procedures, as long as one tube is healthy.

Coping after an Ectopic Pregnancy

The experience often causes women to feel depressed and, understandably devastated. Not only have they lost a pregnancy but they will also be coping with that fact that it may be challenging to conceive again. Coupled with this sense of loss, women may also be recovering from a major surgery, and they will feel run down, and will also have to cope with hormonal ups and downs.

A lot couples feel that the experience either brings them closer or it adds additional strain to their relationship – it’s important to talk about emotions and help each other to heal. Counselling is frequently recommended to couples who suffer such a loss. Other women may be eager to try again and put the unpleasant experience behind them, but it is critical that they bide their time and wait until they (both themselves and their partner) are ready to try again.

Tips And Advice For New Moms Of Twins

Coping With a Miscarriage