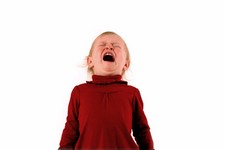 If temper tantrums are not dealt with correctly they can end up becoming a tug of war or a battle of wills between parents and child. To cope with a two year olds’ temper tantrums, parents need to form a united front and deal with their child’s negative behaviour in a positive manner. It is no good if one parent deals with the tantrum the right way, and the other parent sides with the child and gives into their demands. This will cause a lot of confusion and the smart child will soon learn which parent is an easy target.

Temper tantrums are a natural part of growing up and for a two-year old with a limited vocabulary, a tantrum is their only way of expressing their anger or their fear. Parents need to help their kids to find other ways to express their feelings and them also need to help kids to understand that such behavior is unacceptable!  The fact is that if tantrums are not stopped, kids will continue to use them as a means to get what they want! When parents give in or react in a negative way to the tantrums, the lesson will be lost and the temper throwing child will quickly figure out that by  throwing themselves on the floor or stomping their feet, they will be given that toy or bought that much coveted sweet!

Parenting is not a one-size-fits all science and what works for one child may not work for the other. Some children are extra sensitive and parents may need to deal with dozens of tantrums, while other kids who are cool and collective, will learn quickly that losing their temper is not working. For the fussy or highly strung children, parents may need to figure out what triggers the tantrum and once done, they can work out how they can distract the child and let them focus their attention and energy elsewhere.

Typically children in the midst of their -terrible two’ phase are prone to tantrums, and as the child grows and they learn more words, they use words rather than actions to voice their anger or their fear. Usually a tantrum can be sparked by a small and rather insignificant event, such as not getting another treat, or losing a toy to a playmate. If parents give into the tantrum and give the child exactly what they want, they will only be setting the scene for the next upsetting episode, and the child will figure out that the dreaded tantrum is all that needed to get exactly what they want.

The best ways to deal with the tantrum is to, walk away (do not react). When no attention is being paid to the performing child, they will learn that their attempts to get their own way are futile.

The Ground Steps Of Learning

Your Child and the Sun – Important Facts

Your Toddler and the Dinner Table: Food They Love