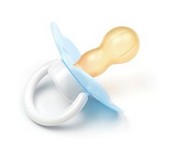 Dummies – you either hate them or love them, but one thing is for certain, dummies have been the saving grace for generations of parents and if it weren’t for these man-made wonders, sleep-deprived parents may very well have been pushed to their breaking point.

There will come a time when dummies need to pried out of the mouths of toddlers, who cling to their dummies and will, under no circumstances, relinquish their beloved -dodies, dum-dums’ etc. to the nasty big people. Moms and dads need to stand together and form a united front and make a decision in unison that today, is the day to break the habit and toss the sticky and grubby dummy into the bin!

When’s the right time to take away a dummy?

The right time to toss the dummy is before a child’s 1st birthday. At this age, they are relatively unaware of their missing dummy and as such the transition is not that traumatic. However, this does not always happen and for some reason, kids are still carrying around dummies after their second or even third birthdays. By the age of two (certainly 3), a child should not have a dummy. Not only will the continual sucking cause orthodontic problems later in life but with a dummy, speech will be delayed or even be affected!  What’s more, the continual use of a dummy has shown to be the cause of middle ear infections in kids!

Taking the dummy away from a toddler is a lot easier said than done and because the pacifier has become a way of life and a habit, most children will not give it up willingly and parents will need to use their best negotiating tactics and techniques. The best way to get the toddler to give up his or her dummy is to ask – simple as it may seem, it may very well work. Explain to the child, that big boys and girls do not need dummies! It may take a few words of encouragement and it may not happen in one day – perseverance is the key to breaking any habit and moms and dads will need to pull out all the stops.

If you have made the decision to use a dummy, here are a few tips for healthy dummy use:

If you are in the process of coaxing your toddler to give up their pacifier –  bear in mind that you never see an adult sucking on a dummy, so you will win and break the habit eventually!

Win the war on juice spills