Head-banger: Is Your Toddler A Delinquent? 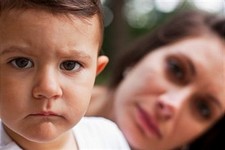 Although toddler head-banging is more common than you may believe, ignorance surrounding this behaviour leaves many of us linking it to mental illness.

It is seen as being socially unacceptable and because of the stigma we attach to general  mental illness in any age group, parents will undoubtedly go into a state of panic should their well-developing toddler take to banging his head on the first object he finds. On the whole though, there is absolutely no connection between head-banging and mental illness.

Yes! We agree – the sight of your toddler inflicting such apparent pain on himself both physically and emotionally is certainly distressing. But your reaction to this disturbing behaviour should always be calm and controlled, yet with a healthy dose of firmness thrown in for good measure!

More common than you would imagine

Believe it or not, but head-banging behaviours in the toddler age group are actually very common, with boys exhibiting more than three times the chances of banging their heads than their mostly lady-like counterparts. However, a fifth of the toddler squad will more than likely partake in head banging.

Research has shown that attention-seeking, stress, impatience and also temper tantrums are the main fuels to the toddler head banging brigade. This could be your toddler’s only known coping mechanism in a world with limited survival tools, as he is still developing and learning how to deal with his emotions.

But there is good news! Damage is rare and this is more than likely a phase that shall pass, especially if those around him take as little notice of him as possible. The best thing to do is not to shout at him and demand him to stop. But on the other end of the scale, don’t relish him in your arms and shower him with hugs and kisses. Stay neutral and, with a firm hold, scoop him up in your arms and place him in a safer, softer environment as soon as he begins this ritual.

Many involved in the field of childhood behavioural research believe such behaviour to be a form of self-soothing for the young child.

Of course, with a society so misinformed on mental illness in general, most parents of head-banging toddlers fly from zero to mental illness and therefore extreme panic! Hold on! Relax! Catch your breath! Your child is more than likely just one of the 20% who are still learning coping techniques.

But some parents still think of Autism and other childhood mental disorders when it comes to toddler head banging yet these are very rare with head banging alone. It takes more than that to constitute mental illness. There are other behaviours and symptoms that would need to be present before that would be a cause for concern.

It is common for toddlers who bang their heads to have at some point found the rocking or rhythmic sensations calming. It may also be that certain toddlers seem to bang their heads as a way of stimulating themselves or of bringing pleasure.

An effort to ease stress

While this may appear as if the child is purposefully trying to hurt himself, it is usually the child’s effort of simply trying to relieve stress.

In a healthy environment your toddler will eventually learn ways to cope with his anger, frustration, pain and the like if you gently sway him away from this action. Just take a deep breath when this begins and try to understand how he will interpret your reaction to his behaviour.

If, however, this conduct continues or seems to worsen, you may want to check it out with your doctor.

Separation Anxiety For Mom And Child

What To Look For When Choosing a CrÃ¨che?

Potty Training – When And How To Start