Nose Picking – Why It Starts And How To End It? 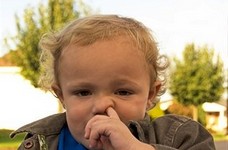 Nose picking is not a topic for discussion at social gatherings or dinner parties, but nose picking does happen and cute toddlers (who have not quite developed their social skills) will find it perfectly acceptable to pick in their noses, it is of little importance where they are, what they are doing or who they with! If it is in there – it needs to come out and that is that. Much to the horror of moms, nose picking is all part of growing up and in some cases, the nose picker will not just stop at picking, but they will actually lick or eat (oooow) whatever has been extracted from their nasal cavities.

Toddlers are known for their cuteness but they are also known for their abilities to embarrass their parents, and toddlers need to be told that nose picking and booger eating is not correct. Nose picking is one of the most unacceptable behaviours, but at the same time, nose picking is a very common habit and it is not only common in kids who are under the age of 5, but many adults usually when alone, and especially when driving, will pick their noses (some are totally unaware that they are doing it)!

Why does it start?

Nose picking starts like any other habit – children may be curious at first and later they may become addicted to picking their noses and to exploring the contents that are found in their nose – by carefully examining the extracts on the tips of their fingers. Later, they may wonder what the extracted prize taste likes and within a few weeks, the child has become a habitual nose picker and worse – a booger eater!

If the habit of nose picking is not broken (or at least curbed) it may develop into a form of obsessive compulsive behavior, where a child is unable to keep their fingers out their noses, even though they know that it is socially unacceptable. The high occurrence of these compulsive pickers and the act of compulsive nose picking has in fact been given a medical name, rhinotillexomania and this condition is very common.

Besides curiosity, experts believe that little fingers are inserted up noses because of severe nasal congestion and the child is only trying to unblock their congested nasal cavities. Dried mucus can be extremely annoying and a child who has not yet mastered the art of nose blowing, may resort to picking their nose in an attempt to try alleviate congested passages.

Since the act of nose picking is seen as a compulsive habit, parents who are determined to put an end to this awful habit will need to be very patient. A child must be told that nose picking is not a tolerable habit and they should help their kids to learn how to blow their nose.

If the child’s nose is continually congested and bunged up,  a visit to the pediatrician or doctor may be worthwhile. The doctor will be able to establish if the child has any allergies that are causing the nose to become congested with mucus, or they may prescribe a natural nose spray that will help to keep the passage moist and this will help to reduce the hardening of the mucus inside the nasal passages.

Never make a child feel self-conscious of their nose picking habit. Moms and dads should try to find non-verbal ways to inform their child that they are picking their nose (such as shaking their heads or clearing their throats), instead of drawing attention to the child’s habit. If the habit is a compulsive one, a child may be blissfully unaware that they are -digging for diamonds’ which means that making them subtly aware of the habit, may very well help to break it.

As the act of compulsive nose picking has been named, so has the act of eating mucus been named, and the name for this habit is mucophagy. Kids are not like adults, they are not grossed out by strange things and besides their blissful ignorance, children who are continually eating their nose pickings, may be displaying a sign of a mineral deficiency (such as iron). Adults and children who suffer from Pica (a chronic iron deficiency) will crave ice, sand and stone – so craving boogers, may also be an indication of a deficiency.

Although adults feel that eating dried mucus leaves much be to be desired and actually invokes a lot of dry heaving, experts are now saying that kids who practice mucophagy are actually benefiting from a strengthened immune system. Friedrich Bischinger, who is a lung specialist, has gone so far as to state that nose-picking together with mucophagy is a sure-fire way to boost a child’s immune system! Fact or fiction – nose picking and mucophagy is frowned upon and most parents will certainly not want to encourage either one – multi-vitamins are a far better and a much better option.

Eating boogers (although a very distasteful practice) will do no harm to a child (according to Dr Bischinger it should actually be encouraged) as mucus is made up only of water and salt as well as a few chemicals which are produced by the body. As such, ingesting the mucus will certainly not have any adverse effects on the child’s health or wellbeing, and when considering the nose and throat are all intricately joined, all humans ingest mucus and phlegm daily!

If you are at your wit’s end in breaking the nose picking habit, take solace in the fact that nose picking is one of the most common human behaviours and habits. If you have made certain that your child is not suffering from a deficiency and it not picking their noses in an attempt to try to breathe easier – the habit can be broken! Kids will quickly learn which behaviours are acceptable and which are not okay.

Taking The Fussy Out Of The Eater

Thumb-sucking – Should You Be Concerned