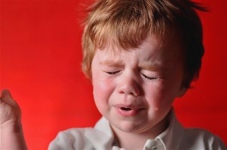 Most toddlers throw temper tantrums. When they don’t want to do something, when they don’t get their way, or when they are frustrated. This is a typical stage of child development and is usually a result of your child not having the verbal skills to be able to communicate the intense desire to do (or not do) something. Most often this frustration is demonstrated with temper tantrums, although some children develop this as a tool to get their own way.

Identify the type of tantrum

Children are well aware of how to push their parents’ buttons and will often use tantrums as a way to manipulate you into giving them what they want if it gets a response. If you are the type to respond quickly to a tantrum, your child will continue to use them to get their way.

Try using verbal cues and body language that clearly indicates that you don’t do tantrums. You send a clear message when you ignore the fits or walk away, which teaches them that tantrums are not acceptable.

Frustration tantrums are different to manipulative ones and require empathy from you as the parent. Your child’s mental and motor development has developed more quickly than the ability to communicate and the frustration they feel at not being able to do something cannot be expressed properly. Try helping out when the frustration is over an inability to accomplish a task and try to direct your little one’s efforts to a more manageable part of the task. This will help to establish your authority as well as build your child’s trust.

One of the most common examples of frustration tantrums is the “I’ll do it myself” tantrum when the child is determined to complete the task. Encourage your child to use words or body language to communicate feelings and needs.

Children have the innate ability to throw a tantrum at the worst time for parents: when you are on the phone, at the supermarket, or busy with someone else. Most times these very circumstances that make it inconvenient for you are what set your toddler up for a tantrum. Take note of what triggers the tantrums. Often there are pre-tantrum signs when your child begins to whine or grumble, indicating it is time for you to intervene.

The most common causes of a tantrum include boredom, hunger, tiredness and being over-stimulated. Try to take note of the times when your child is triggered into a tantrum and make sure you are prepared for next time with a snack or a nap before you set out of the house. Frustration tantrums must not be taken personally; your child needs to be taught how to handle the frustration with words or body language rather than anger and theatrics, it’s not being done just to upset you.

Although temper tantrums in public places are embarrassing, making it difficult to consider your child’s feelings, you need to stay cool. Your child is out of control and needs you to stay in control. If your child throws a fit in a public place, remove them from the situation to a calm place, like a bathroom or your car, where they can blow off steam and you can quietly handle the situation.

One of the best ways to prevent a tantrum is to plan ahead. To expect your curious toddler to behave in a controlled manner when they are hungry or tired is unrealistic. Time these activities for after you are both rested and fed.

There are certain times when tantrums are not acceptable, and you cannot give in under any circumstances. Staying in the car seat is a good example of this and a common one that parents deal with. Make sure you do not respond to the theatrics – and stand your ground. If the car seat is an issue, place your child in the seat and walk a short distance away until the child calms down. Once your child is calm, try to discuss the purpose of the car seat and explain that you want your child to be safe because you love them.

Where possible do not ignore a frustration tantrum as this deprives your child of valuable support resource. Once your toddler develops the language skills necessary to express themselves you will be able to say farewell to the tantrums.

How To Survive The â€˜Why- Stage

Toddler Behaviour: Techniques That Can Help Against Toddler Meltdowns

Toddlers And Dealing With Their Defiant â€œNoâ€s