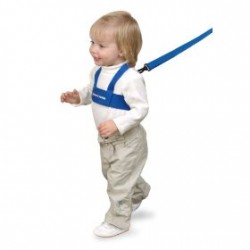 The subject of toddler harnesses gets both parents and non-parents all fired up. It’s certainly a contentious issue with some parents regarding them as lifesaving, and others coming up with all manner of mean names for the parents who resort to using them.

But at the heart of this issue is that of toddler safety. Are these child harnesses harmful to a developing child or are they a valid tool for keeping boisterous toddlers safe and sound? Let’s look at some of the background and arguments both for and against them…

Toddler harnesses: what the critics say

If you have ever used one, or been in the presence of a parent who was using one you would have seen first-hand the shocking judgements that can be passed. People gasp, criticise and pass commentary as though you were abusing your child. It can be difficult to bear! Why is the public so outraged at the use of toddler reigns? Critics say that it is akin to treating your child like a dog.

Critics are also quick to point out that the use of toddler leashes denies the child the opportunity to learn about environmental dangers and to listen when a parent says no. It is possible that a child may take longer to learn the basics of walking safely and listening as these are skills that need practise.

Toddler harnesses: what the proponents say

Anyone who has had a toddler knows that they won’t always listen. Many doctors say it is better to have a child on a leash than a child in the emergency room because they slipped away and into oncoming traffic! The number one argument for the use of the harnesses is for child safety. Usually a number one priority for any parent.

Those in favour of the harnesses say that it gives the child added freedom to explore and interact with their surroundings. Harnesses also allow children more exercise than being confined to a pram would.

Hand holding for long periods of time can hurt little shoulders too. In some cases, children can suffer dislocated shoulders from sudden yanking motions while hand holding with adults. In these cases, paediatricians will recommend harnesses.

For moms of multiples and those with disabilities, harnesses can allow children added freedom of movement. Some moms argue that when you have more than one child under the age of 4, these harnesses become a necessity. It’s difficult enough to keep an eye on one child, never mind trying to do everyday things like grocery shopping and running errands.

Harnesses: past and present

It’s interesting to note that harnesses have been widely used since the 17th Century, when they were known as ‘leading strings’. It was believed that these strings allowed children support while they learned to walk.

Toddler harnesses have come a long way since those days. Nowadays there are all manner of fun and cute leads. Gone are the days of doggie-esque leashes. Today there are adorable backpacks that come with a tether attached. Some kids reportedly ask for their backpacks before leaving the home, and others are so taken with them, they wear them around the house for fun.

Buying a harness: a quick guide

Child harnesses are widely available in South African baby stores as well as through various online shops. There is a surprisingly wide variety of locally produced harnesses and they are inexpensive as well. The safety backpacks seem to be more popular because they are both cute and functional, giving children the ability to carry a few items as well. Expect to pay less than R100 for a harness/backpack.

As with any of the multitude of parenting choices, the final choice is with the parent. If you need to tether your toddler to you when you leave the home – who cares what others think?  Many of the cruel commentators might change their tune when they have a toddler of their own one day.

Reading To Your Little One

How to survive the “why” stage

How To Survive The â€˜Why- Stage