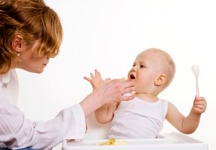 Trying to get the mix of food right on your toddler’s plate can sometimes be exhausting. At this age kids are known to be quite fussy eaters. What’s been tickling taste buds for the past week may just be spat out in horror tonight!

And so you start all over again, trying a never ending range of new foods and hoping your toddler will like even just one of them! But like it or not, he’s king of his high chair and he decides what he’ll eat and what will land on the floor along with an almighty tantrum as only a toddler can throw!

Although your toddler won’t need mounds of food at this age, it’s a good idea to get him used to regular family meal times. With your own busy schedules this may be difficult but it is important that the family sits down together and attempts to enjoy their meals together. He will learn table manners from the rest of the family. He will also watch what the others eat and there is a good chance he may just play copy cat here, too.

We eat with our eyes

We all know the saying that we eat with our eyes, and your toddler is no exception. Preparing food nutritiously and serving it creatively is the key! Make face patterns from the foods on his plate or create ship- or train-looking disguises – whatever his latest toy fetish is!

But toddlers generally aren’t large meal eaters, so don’t be worried if he merely picks at this food. It really is just a stage.

Because they are on the go all of their waking hours, slip in some finger-snack foods at intervals during the day. A health muffin will always go down well, as well as foods he can dip into a sauce. Here, again, make it a fun-looking plate of snacks.

Kids respond well to colour, so maybe get a bright and colourful plate, something that could have separating compartments for different foods.

Another winner is to let your child start feeding himself. What could start out as a novelty could become habit! Don’t make a big deal about him not eating as that can just make him more stubborn to exercise his power over the situation. As far as possible, allow your toddler to be involved in the preparation of his food and turn a blind eye to the mess! You can always clean it up later.

An older sibling, or a relative, or friend his own age who is a good eater may just break the cycle for him as he watches them and copies.

At a young age, children may feel the need to exert their independence. His fussy eating may well be his way of trying to stand his ground and actually has less to do with eating the food you’ve made him than it does showing that he makes his own decisions. In other words he could just be seeing how far he can push the limits of your authority. This is why pressuring a child to eat often backfires.

So stay calm and don’t let him see that he is ruffling your feathers – in no time you’ll have a happy and healthy eater.

Head-banger: Is Your Toddler A Delinquent?