Toddlers And Dealing With Their Defiant â€œNoâ€s 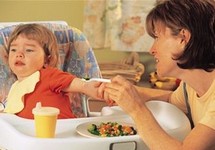 Consider how fast children develop. Not only physically, but emotionally, too. But because the emotional development is not necessarily tangible we tend to lose sight that even at the delicate toddler age, our children are learning emotions such as control and choice – and they’re taking their cues from their parents.

There’s a saying that goes -what you see is what you get . True in its own right, but more adept from a toddler’s perspective if the wording is changed to read -what I see is what I learn .

Be careful what you teach your youngsters, they’re learning from you all the time. And when they take on the world at toddler age with their fierce little tempers, they’re ready to test their power in struggles with you, learning responses from your very own behaviour.

Testing their power against you as the parent or against their care givers does not mean that you have a naughty or difficult child on your hands. It actually means you have a well-developing child because these struggles for power are really just normal development. For the toddler, this is the way he learns just what his boundaries are and what is acceptable behaviour or not.

Things only turn ugly, erupting into a temper tantrum or the like, when he is out of options as to how to feel or act or control his boundaries.

It’s so important for us to remember that in order to learn and to grow emotionally, children – including toddlers – need to be given choices. Toddlers may not want to nap when you say they should, eat when you decide it’s mealtime or play because you invited his cousin over to build blocks.

The art of reverse psychology

Now although routines need to be followed and we can’t throw discipline to the wind, using a little reverse psychology will never harm them!

It’s not a good idea to demand he finishes all his vegetables as you lay his plate in front of him. Make it exciting and ask him which vegetable he plans to eat first, the carrots or the peas. If he’s fighting nap time tell him he doesn’t have to sleep but that you need him to lie quietly with his favourite teddy until teddy falls asleep. He’ll nod off in a few minutes!

The inevitable power for struggle between parent and little person can, however, come at you at any given time and with absolutely no warning. It can be a power struggle over meal time, bath time, nap time, toys, in the shops, out of the shops…

But it certainly can be one of the most infuriating and humiliating times when that same little person simply says -No to you and won’t budge.

Jan Faull, a Seattle-based parenting educator and author of Unplugging Power Struggles: Resolving Emotional Battles With Your Kids Ages 2 to 10 had this to say: –Some kids are just more determined to grab control at a younger age and so are more likely to end up in battles with their parents. “Such kids just wear you out,” said Faull. “You love them, but they’re the future CEOs: They have very clear ideas about how things should be, but they’re sitting at home being told what to do by their parents.”

As many of us have discovered in relationship arguments with our partners, sometimes silence is so much more powerful than arguing! Try the same technique. By simply remaining silent except to tell the brewing monster that you will not talk to or listen to him until he calms down, you will defuse a possible full-blown tantrum. But most importantly, you will be teaching him healthy, acceptable behaviour patterns which will stand him in good stead for the rest of his life!